I was up for breakfast and then spent sometime dealing with the blog. I find blogging helps me retain stuff I would normally forget.

I said fairwell to Paul the owner and headed for the coast, today’s target Agadir. The poverty continued and then as I hit the coast suddenly the road was wider with proper road signs, a dual carriageway in fact. Then on the outskirts of Agadir a very modern view, like Marbella with high rise hotels and car dealerships. I was surprised and it continued to the beach. So package holiday in fact, I had lunch in an English pub, which bore no resemblance to any English pub except perhaps The Queen Vic on tv. Cheap dark red leather, dark wooden tables, warm beer and cold food.

Anyway it turns out this once poor fishing-trading port and heavily fortified hill was much like the rest of Morocco until 1960 When a 15 second earthquake reduced the place to rubble. No small earthquake that one, taking with it the lives of 15000 people. Anyway that explains why most of the city looks like a holiday resort and less developed parts resemble a 1960’s council estate. My campsite was right in the middle of the 1960’s. Shabby chic we will call it, or just shite. The place must have been a mini Butlins at one time, but those days had passed. The pool has been empty a long time, with tiles falling into it’s dusty depths. It’s ok there’s no barrier round it. The buildings, toilets and shower blocks all decayed and the paint peeling from the walls. 50 year old bunting hangs like prayer flags in the Himalayas, all torn with the ravages of time, but at £4 a night I’m staying. The owner, as lifeless as his once thriving resort is just waiting for the developers to get this far along the beach, and they are coming, but I feel it’s a case of them getting here before his own deteriating condition brings his hopes to an end. Anyway, on the bright side I just made him £8 richer, now jog on and buy some toothpaste.
I walked the length of the beach, passing the many resteraunts and fast food outlets. Obviously I couldn’t pass them all, there was a copy Starbucks, Mcdonalds and ice cream sellers, what’s a man to do? Oh and Pizza Hut which is where I sit now some 24hours later, with my work discount card firmly in my grip! The beach is lovely, with golden sand, I could have taken my photos here and had a real holiday. The sunset very nice. I walked back along the block paved, intracately patterned walkway. Itself disappearing under a sea of chewing gum. One thing I like being obliterated by another I despise. I mean if you’re going to chew gum, be a little responsible, it comes in a wrapper people. Sorry but it annoys me. 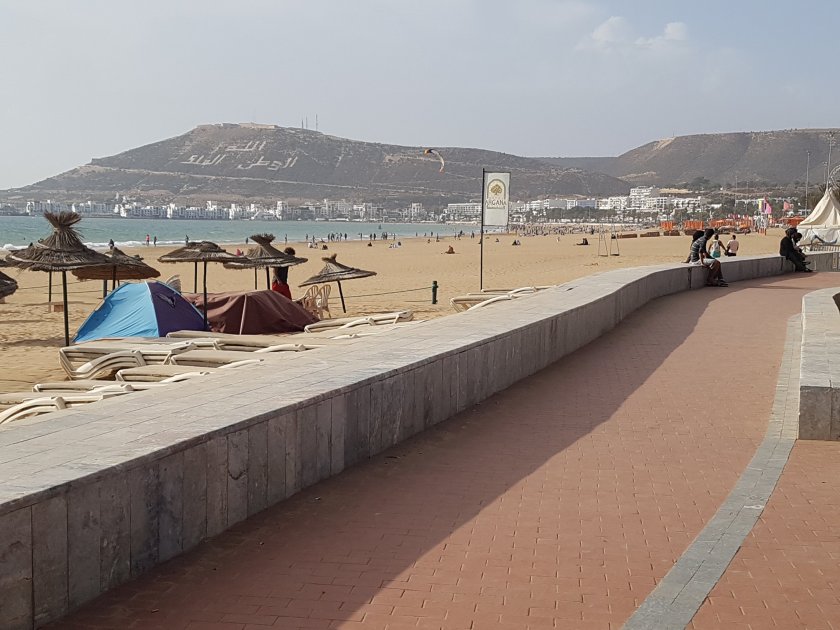 Sunday and it’s time to explore the Souk. Housed in the inner city enclave, itself one of the few ancient parts to have survived the quake, it is one huge market place. The usual thriving hustle and bustle amongst 900 stalls. It’s a blast of colour and smells, not all good. It was busy with locals but no holiday makers I could see. I’m sure they go there because the traders are great at spotting them. I loved the vibrant atmosphere and good natured banter between sellers and this non buyer.

After that it was time to tackle the fort on the hill which would have happened if it weren’t so far away and blocked by Pizza Hut. It can wait until tomorrow. 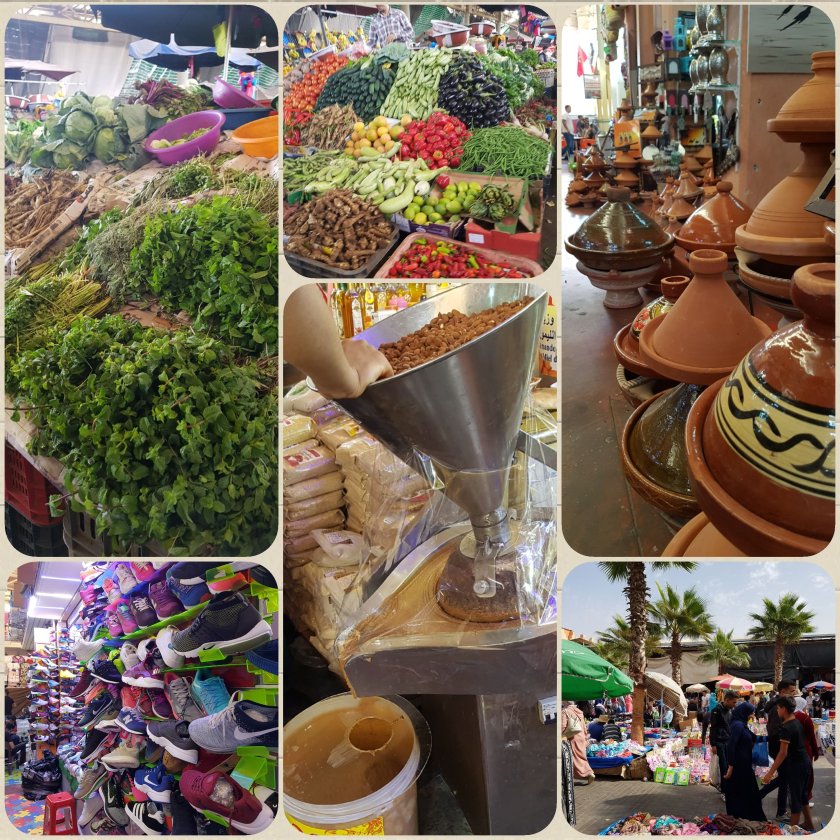 I did however pass the royal palace where the guy who looks like David Walliams, on their money, lives. Apparently he’s the king.

And apparently he is very popular, doing great stuff to move Morocco onwards, so why does the palace have an outer fence like normal with armed guards on the inside and outside every 30m? Added to that there is an inner wall that you cannot see past.

A new adventure biker just starting out on my blogging adventures. View all posts by benjackson63